Dave and Laura Fosson – The LASIK Gift-Givers of Waverly 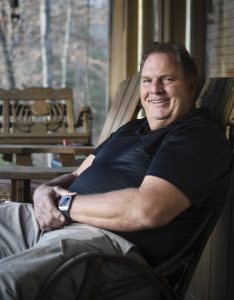 After watching his son, Nicholas, wake-up countless times from his naps on the couch with contorted or broken glasses, Dave Fosson asked his son if he was interested in having LASIK eye surgery. Nicholas was interested, knowing this common vision correction procedure would eliminate his need for glasses. After a consultation at LasikPlus Columbus LASIK Vision Center in Easton, about 75 miles north of their home in Waverly, Nicholas’s procedure was completed and paid for by Dave.

Soon after, Laura, Dave Fosson’s wife made mention that she has long wanted to have LASIK, and after seeing the results of Nicholas’s procedure, she was more interested than ever. The couple made the trip back to LasikPlus Columbus to have her procedure completed with Dr. Joseph Thomas.

With Nicholas and Laura being so happy after their LASIK surgeries, Dave soon funded LASIK for their oldest son and their son-in-law.

While it isn’t unheard of for parents to pay for their children to have LASIK – LasikPlus gift cards are given as gifts quite often, the Fosson’s generosity of gifting LASIK didn’t stop at family. Since paying for Nicholas’s procedure, Dave and Laura Fosson have paid nearly $30,000 gifting improved vision through LASIK to friends, family members, and two acquaintances. The cost of a LASIK procedure ranges from $1,500 to $3,000 per eye depending on the type of procedure needed to correct an individual’s vision.

Fosson is recently retired from Centrus Energy in Pinkerton as a manager and states that the amount he has spent certainly isn’t lost on him, but the money isn’t his main focus. “There’s no rhyme of reason to it. We’re just on a roll, and we can afford it,” said Fosson.

A more recent recipient of Fosson’s generosity is Jenny Pettit-Ross who is a longtime friend of the family. Pettit-Ross, 58, of Piketon struggled to remember a time when she had clear vision. Her vision was negatively affected by a case of German measles when she was a child. She was considered legally blind and prescribed glasses, which she had to wear daily since the third grade. This resulted in her being made fun of as she was the only child in her school who wore glasses. Dave, a few years ahead of her in school, heard about the bullying, and being the great guy that he is, would meet her at the bus and walk her to class every day to prevent the bullying.

Laura Fosson mentioned to Dave that Jenny may be a perfect recipient of their LASIK gift-giving generosity, not only because of her poor eyesight but because of her contribution to their community. Jenny and the Fossons volunteer and all of their kids’ football games. Jenny cooked dinner for the players and ensured that they went home with full bellies.

At a high-school graduation party of Jenny’s grandson, the Fossons presented her with a card that read:

“Because you have given so freely of your time and heart to so many… you truly deserve the gift of perfect vision on us!”

Dave drove Jenny to LasikPlus Columbus where Dr. Thomas performed her procedure as well. In about 15-minutes, the time it takes from the procedure starting to being completed, Jenny opened her eyes. “It’s so hard to put into words what my heart felt – that was the first time since third grade that I’d ever opened my eyes and could see” so clearly without glasses, she said.

Prior to her procedure, Jenny was only able to make out shadows of figures if she wasn’t wearing her glasses. Now, she is able to see the faces of her nine grandchildren clearly without glasses!

“This wasn’t a $20 basket of flowers; this wasn’t a $50 gift card. This was a $3,500 surgery,” said Jenny. “That’s not just something you receive. It was like hitting the lottery. I would’ve never been able to afford that myself.”

The Fossons have since paid for two additional acquaintances to receive LASIK surgery with Dr. Thomas as LasikPlus Columbus; a single mother the couple met via Facebook, and a young man Dave previously coached in Pee Wee football.

For Dave and Laura, the act of giving is contagious. It isn’t about the money, but about the reason behind giving, Dave said. “What I’m trying to do is instill in other people the thought that, ‘Maybe I should do something for someone else,’” said Fosson.

“It’s all relative. It sounds like a lot of money, but then again, what are you spending the money on? If it brings you happiness to bring somebody happiness and changing their lives forever, that’s better than anything.”

Interested in learning if you’re a candidate for LASIK? Get started today by scheduling a free LASIK Consultation.

LasikPlus
Jon Ellis, M.D., FAAO is a graduate of the University of South Alabama College of Medicine and has been performing laser refractive surgery…
Did you know: Over 99% of LASIK procedures performed by LasikPlus result in 20/20 vision or better?