15 Years Later: LASIK and My Life

Jenn received her first pair of glasses at the age of six after a routine screening at her elementary school revealed significant nearsightedness (or myopia). After eight years of breaking or misplacing pair after pair of glasses, her parents finally consented to let her wear contacts. “I was an absent-minded klutz,” she says. “I don’t think I ever had [glasses] that lasted more than four or five months.”

Daily, followed by weekly, contacts served her well until her 19th birthday when her parents surprised her with LASIK treatment. She had the procedure in August of that year, and since then she has enjoyed the gift of improved vision.

How long has it been since you had LASIK?

Fifteen years. I never thought about it until now, but that’s three years longer than I ever wore contacts or glasses. I go to the eye doctor every one or two years for check-ups, but I just don’t think about it anymore. It’s nice.

Have other members of your family had LASIK? I know that vision problems sometimes run in families.

My mom had it about six months after I did. She denies it to this day, but I think she was using me as a guinea pig.  My folks gave me LASIK for my birthday, and I know they did it because they love me, but I also think it was a test. Because my eyes didn’t fall out of my head or anything like that, she felt comfortable having it done. LASIK was pretty new back then, and we didn’t know anyone who’d had it done.

How has your life improved without glasses or contacts?

I actually liked glasses, because it was fun to pick out the frames and try new styles. My problem was that I couldn’t keep them for any extended period of time. I was always setting them down and knocking them on the floor or forgetting them on the school bus. Contacts were better, but I kept falling asleep in them, and my eyes would be sore the next day.

It’s nice not having to worry about making sure I can see. Sometimes I would leave my contacts out because they were itching, but not being able to see is really frustrating. I also got a lot of headaches before LASIK.

What do you do differently since getting LASIK?

During the first few years after I got LASIK, exercise was a complete revelation. It just feels normal now, but back then, I was constantly relieved to be able to work out without worrying about how much sweat was dripping into my eyes.

I also read for about half an hour before bed — I’ve done that since I was little — and it’s been much easier since LASIK. Because I read in bed, glasses would always irritate my ears when I was lying on my side. When I got contacts, I’d have to get up after I was done reading to take them out. Now I can just put my book down, switch off the light and fall asleep.

Would you recommend LASIK to others?

It’s such a personal thing, but if someone is tired of wearing glasses or contacts, I would definitely tell her to consider LASIK. I only know my own experience, but I can’t imagine going back. Between my home, my job and my family, I’ve got enough to worry about already, and not needing my contacts lightens the load.

Do you have any advice for someone who is about to have LASIK?

Just relax. It’s really stressful because we rely so heavily on our eyes. The idea of letting someone — even a doctor — mess with our vision can be scary. I think I might have more trepidation now if I were just starting to consider it than I did years ago. When you’re a teenager, you assume you’re invincible. I think adults are a little more wary, just like my Mom was at first. So relax, take a deep breath and talk to someone about your anxiety. That will help calm the nerves. 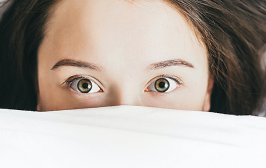 The Dangers of Sleeping in Your Contacts

Celebrate Earth Day By Getting LASIK!

What is a Scotoma?

Online Eye Exams; Do They Work & What to Expect

Why Do My Eyes Hurt?

Addressing the Common Question: “Does LASIK Hurt?”
Did you know: Over 99% of LASIK procedures performed by LasikPlus result in 20/20 vision or better?