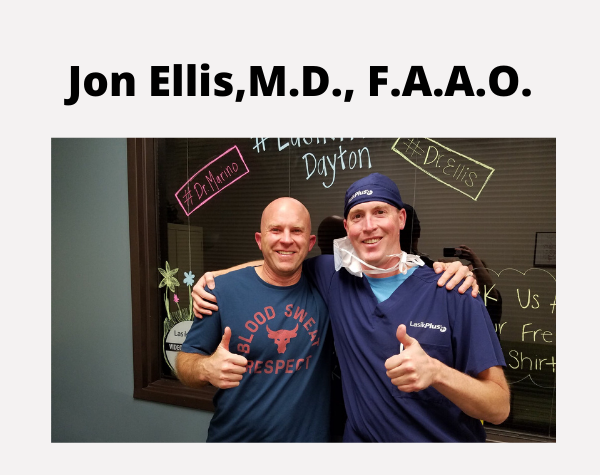 Jon Ellis: Hey I’m Jon Ellis one of the surgeons here at LasikPlus. I’ve been in Dayton for about 3 years finishing up serving in the military so I’ve kind of been everywhere.  Actually 2005 – 2009 I was in San Antonio and that’s when I learned and started doing LASIK and PRK and then I went to Keesler Mississippi so there I was kind of head of everything and running the center and the flight commander. We did a ton of LASIK and PRK.  This is a great job for me to get into so I’m happy to bring everything I’ve learned, years of refractive surgery experience over to LasikPlus. I really love what I do here. For me the best part is the staff I get to work with because they are all so professional they know everything, they’ve been through everything and it makes it really easy.  I just show up and step on the pedal.  The other really nice thing is that it’s a really scary time for people because it’s this cool idea like hey maybe I’ll get LASIK until you actually get in there and do it and then everybody gets really nervous and it’s really nice to be able to get people through that. So they get on the other side and see that wow this is amazing I see so great and it’s just really cool to just get to change people’s lives and help them finally get rid of those glasses and contacts.

Jon Ellis, M.D., FAAO has been performing laser refractive surgery since 2008 and has performed more than 7,000 procedures with the United States Air Force. He has led laser centers at both Keesler Air Force Base and Landstuhl Regional Medical Center in Germany. While under his leadership, the Keesler Air Force base laser center rose to be the second most productive and cost-efficient laser center in the USAF. He was integral in the implementation of key enhancements which increased the refractive surgery success rates at both Keesler and Landstuhl which resulted in a 96% success rate of 20/20 uncorrected vision. In additional to being an expert LASIK and refractive surgeon, he is certified in ICL (Intraocular Lens Implant) surgery. Watch the video and learn more about him.

Did you know: Over 99% of LASIK procedures performed by LasikPlus result in 20/20 vision or better?