Since giving Tuesday, LasikPlus CEO Craig Joffe choses a standout employee each week to give a monetary gift to.

The employees in turn get to show their gratitude by giving away money to other employees and to charities that are important to them.

“It’s kind of a way to kind of keep the gift of giving or to you know, in a positive cycle,” Joffe said. “We thought that it’s a good, it’s a good gesture to the community, and all the communities that our associates work in and hopefully this will also inspire other companies to do the same thing.”

Payroll administrator Molly Hamilton is one of the 70 employees nationwide touched by the generosity.

“Craig had asked to speak to me last Thursday. You know, you’re always like what I do, and he pulled me in there and he’s like, ‘You know, we’re doing the gift thanks program and we’d like to gift you $10,000 dollars,’ which like blew my mind, absolutely blew my mind,” Hamilton said.

Her father is a Vietnam veteran is battling cancer. Hamilton says it is a gift her family is eternally grateful for.

“I can’t find the words, it really is amazing,” Hamilton said. “I’m still a little in shock about it. And it just means a lot. Our family is going through some things right now. So, it’s going to help a lot with that.”

In addition to the $10,000 dollars she received, she also gets to donate to a charity of her choice.

“When Craig had told me that he was that I had money I could give to a charity, my first thought was the VA because my dad has lung cancer and they’ve been so great to him,” Hamilton said. “But he [Molly’s father] said ‘Molly, I’d like you to give it to some someone who helps children.’ So, I chose the Best Day Ever Foundation, to help families that have children going through childhood cancer, or other illnesses.”

Read more about this story at Local12.com. 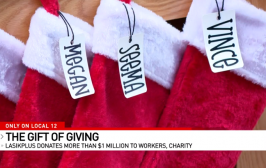 LasikPlus Gifts More Than $1 Million to Standout Employees, Charities
Did you know: Over 99% of LASIK procedures performed by LasikPlus result in 20/20 vision or better?